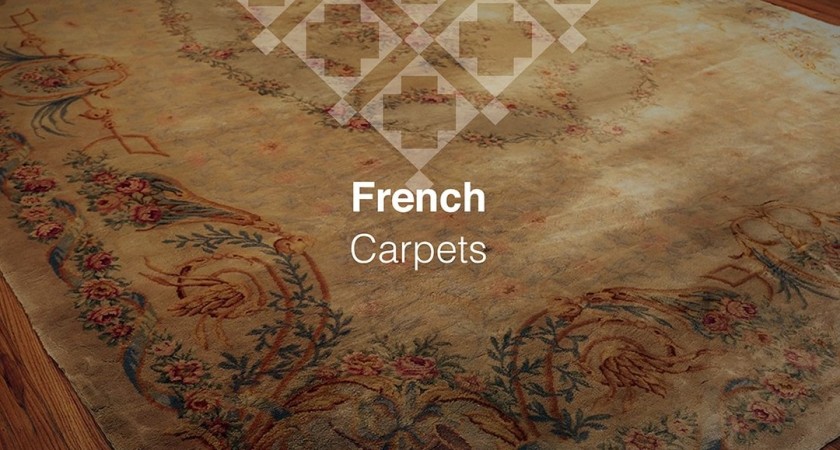 According to the historical evidences, record of handmade carpet is completely interconnected to Persia and oriental civilizations and these masterpieces have traveled to across the world from their oriental origins.
Worldwide reputation, diversity and durability of Oriental, Persian carpets is the reasons for lesser-known of Western especially European ones. Undoubtedly, top rank of European handmade textiles belongs to French carpets and tapestries.
This written article by Boustani Glorious Handicrafts lets you know why French carpets must be considered as one of the most exquisite kinds of handmade textiles.
The historical and leading age of French carpets weaving backs to centuries ago, sometimes between 1620 to 1860 or in other words, years between the reign of Henry IV, the beginning of Louis XIII and the end of Louis XVI's rule.
At this period time, official workshops for weaving carpets in France was launched.
The most outstanding workshops of French carpets belonged two companies named Savonnerie and Aubusson.
It should be said that approximately all of the French rugs that are well-known for experts and global carpet lovers are products of these two companies.
Royal carpets of Louis XIII and XIV court produced by Aubusson and Savonnerie companies in middle decades of the 17th century, which technically and aesthetically were indebted to Eastern traditions but, the source of their inspiration for design and motifs were French Passementerie.
Savonnerie workshop established in 1628 in Paris to presented their products to high-ranking diplomats and governmental key people for decoration of royal palaces.
It can be definitely stated that the French craftsmen learned carpet weaving from the Easterners and French rugs are one of notable outputs of Franco-Ottoman alliance during 1536-1798.
This phrase could be stated because French rugs have woven with symmetrical knots or in other term Turkish knots.

Aubusson
Aubusson is a small town in central France and Aubusson royal carpet weaving company launched in 1665.
During the reign of Louis XV, Aubusson had the busiest working period time and its produced carpets exclusively belonged to the royal family until the early 19th century.
These type of French carpets were mostly designed by their weavers and the most important Aubusson carpets that is currently existed, were made in the early 19th century. Savonnerie
Savonnerie is derived from the French word Savon means soap.
Construction of a soap factory began in a village in western Paris called Savonnerie in 1607.
The soap factory was abandoned in 1609 and the building remained unfinished. In 1610, Marie de' Medici, mother of Louis XIII and his legal regent, rebuilt the unfinished building of the Savonnerie workshop and used it instead of an orphanage. In 1624, royal court of Louis XIII received a proposal from Pierre DuPont and his apprentice Simon Lourdet about production of handmade carpets at Savonnerie orphanage. According to the suggestion, orphaned children be used to produce and weave carpets in the orphanage. Simon Lourdet individually opened Savonnerie Carpet manufactory in 1627 and under a patent of eighteen years, a monopoly was granted by Louis XIII for manufacturing handmade carpet to the Savonnerie Company. In 1673, Louis XIV made his royal court official owner of Savonnerie factory and took all the related responsibility in his hands.

A direct manager was appointed by the royal court for the Savonnerie factory in 1714. Afterwards, Savonnerie carpets has used to as floor coverings of Louvre Palace and Palace of Versailles.

The Palace of Versailles

The Savonnerie factory was temporarily closed in 1825 and its machinery transferred to the Goblen factory.

Gobelin
Jean Goblen was the man who launched the great dyeing workshops in Paris in the 15th century.
In the 16th century, he added the first tapestry weaving workshops that worked based on tapestry weaving, to his complex of dyeing workshops.
During reign of Henry IV in France, a new generation of Flemish designers, dyers and weavers moved to France and began working in Gobelin weaving workshops that led to a resurgence of the industry. In honor of Jean Goblen, the building of his first workshop in Paris was named Gobelin. In Gobelin manufactory, tapestries and precious textiles were produced exclusively for the French royal court. In 1826, some workers, weavers and machinery of Savonnerie were transferred to Gobelin manufactory to promote art-craft of carpet weaving in new place but Gobelin’s products kept its own style and Gobelin continued to produce tapestries. This transfer could be the reason, designs of these French carpets in Iran are known as the Gobelin or Goblen design. French carpets mostly have oval medallions and the main motif in these carpets is floral and leafy details with light shades in the center and border which seem very natural, elegant. Luxurious identity of French carpets, innovative designs of Aubusson, Savonnerie and Gobelin beside workmanship French artisans had learnt during their working backgrounds led to a revolutionary happening in first decades of twentieth century that was result of entering Avant-garde designers and artists into the carpet, decoration, interior architecture industry which are called Art Deco rugs.

Art Deco rugs are fundamentally inspired by French carpet designs thus, France can be considered as origin of these unique pieces.

Boustani Glorious Handicrafts as a leading cultural business is working on a collection of modern Persian rugs that is inspired by minimalism, coloring and grace of original French carpets that will be launched soon.