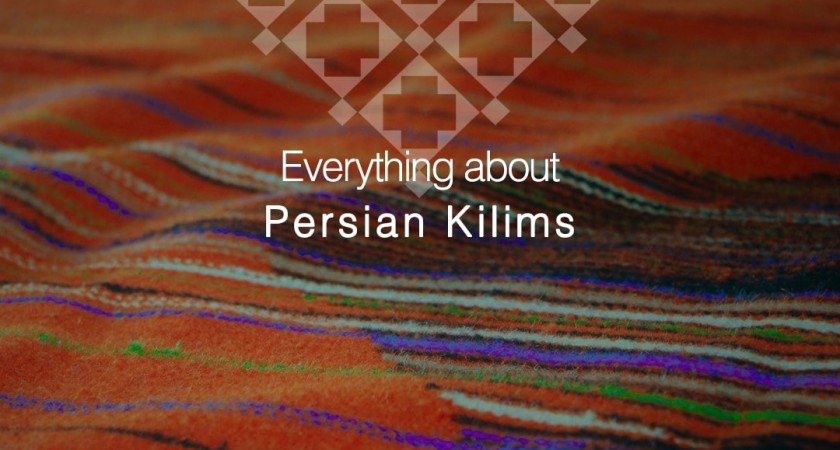 Kilim is a flat handwoven that is produced by tightly interweaving the warp and weft generally with wool of cow, sheep, camel, goat.

Boustani Glorious Handicrafts tells you everything about Persian kilims that currently are recognized as a kind of Modern Persian Rugs which can be divided into below groups:

Kilims that putting wefts technique are used for the weaving process with less thickness than others named double faced or flat-weave kilims. In this kind of Persian kilim, motifs in both sides are same and utilizable. Qashqai kilims, Senneh kilims in Kurdistan and Kamoo sofrehs belong in this group.

One faced kilim or Soumak

Soumak is a handwoven textile with special technique of weaving. Soumak is a strong, beautiful tapestry used as carpet and saddle bag.

The name of Soumak is derived from the name of Shamakhi city in Azerbaijan, Caucasus where was hub for weaving of floral weft-faced kilims. Soumaks finest kilims come from the Caucasus and also have been produced in Iran and Turkey since beginning of 20th century.

Soumaks are thicker than ordinary kilims. Motifs and designs of Soumak are visible in front side and behind it on the back side, only colored yarn are scattered irregularly.

Other one faced kilims except Soumak

In the texture of this type of kilim, flat-weaving method mean putting wefts, Soumak weaving style and in some cases, rug weaving technique are used.

Saleint kilims of Ilam in Western part of Iran, Shiraki Pich or Suzani kilims of Sirjan and Sofreh Kordi in Northern Khorasan are sections of this category.

Persian Kilims are categorized based on motif, color, material in some main kinds as below:

The most important kilim of Shahsavan tribe who resides in Eastern Azerbaijan and Ardabil, Iran is a Soumak kind of kilim named Varni.

The best horse bag in Iran is the Shahsavan one which contains six pieces with varied colors.

Briefly, Turkmen kilims are tight and light. In this kind of handicrafts, color is the most important factor.

Red color that is extracted from madder roots with different shades plus orange, green, blue and sometimes yellow are other main elements that these colors create a beautiful harmony.

Usually throughout the Baluch kilim is striped which different patterns and colors are visible in each row. The most common design of Khamseh kilim is a natural dark-colored background with diagonal star shaped motif as overlapping rhombuses. Today, Senneh is called Sanandaj, the capital city of Kurdistan province in Western part of Iran.

Senneh kilims are famous as one of the finest kilims of Iran. Senneh design is mixture of Herati and Botteh with diagonal lines in multiple colors.

The most beautiful design of Senneh has a medallion in the middle of a colorful background.

In Afshar kilims, star flowers that are arranged obliquely, seem like lozenges as detailed patterns.

Harsin in Kermanshah province is known as the national city of kilim in Iran. Harsin kilims are woven according to the taste of their weavers and what has gone around them. In these flat-weaves, borders and backgrounds are full of detailed and compact motifs hence, there is no pattern-less part. Motifs frequently have margins, sides and a few medallions along each other in the center.

Borders are usually full of rectangular, lozenge or triangular-shaped motifs with material of goat’s wool because of its anti-moth feature.

Vibrant colors are characteristics of Qashqai kilims but, contrasting colors are also used alongside the red and yellow. Geometric motifs are an essential part of Qashqai designs such as octagon, octagonal star and image of peacock, goat, deer.

The Kamoo Sofreh is a square shaped type of Persian kilim that often spread on the ground, on which to place bread and food, which is considered sacred.

The Sofreh is symbolically used as a clean surface where it is possible to eat without contaminating the food/meal.