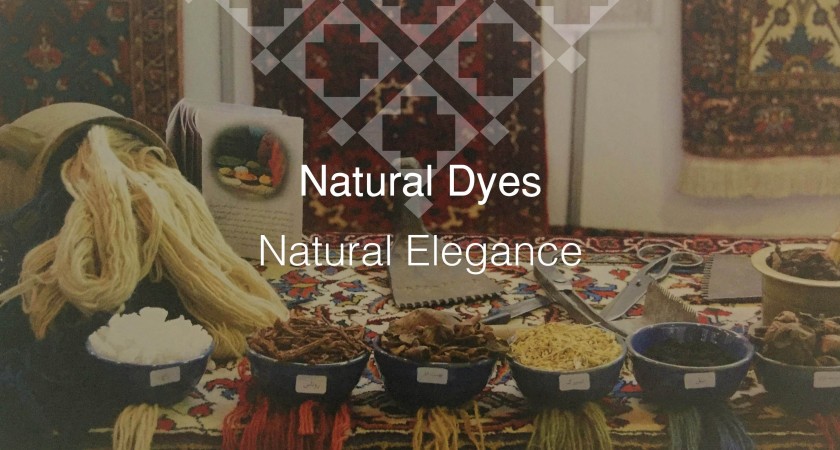 Dyeing yarn is a real combination of art and science that has had an important role in development of weaving textiles during the history.

Natural dyes are colorants or dyes derived from plants, insects or minerals that give the yarn special exclusivity that finally add glory, elegance and durability to the handmade carpets and rugs.

The main part of natural dyes are vegetable dyes from plant sources like berries, roots, bark, leaves and wood and other biological sources such as fungi and lichens. Walnut shell is used for any number of brown shades, most commonly the beige which many dealers describe as natural camel hair. Oak bark and gallnuts also produce rich browns, and if madder is applied in heavy concentrations and heated for several days, the result can be a reddish brown.

Cochineal is another important dye substance. Although known by one name, it actually comes from several chemically related substances. The first to be used widely is derived from a scale insect cultivated extensively in Northern India. The insects puncture the bark of certain trees and suck the sap, producing a resinous exudate which imprisons them to the tree. From twigs encrusted with these insects a red dye is extracted. It is also called “lac” and has been exported from India for centuries. It was widely used in Kerman and Khorasan, probably because of their geographical proximity to India. The other cochineal, by far the most extensively used now, comes from an insect growing on several species of cactus in Mexico and the Canary Islands. The dried bodies of these creatures are used to produce a dye that is almost identical to the Indian lac; when export began from Mexico, it largely supplanted the Indian product. Use of this color never penetrated into northern Persia (and not widely into Anatolia), probably because madder was much more plentiful there. The dyeing process resembles that used for madder, and sometimes this latter dye is added to vary the shade.

Among other natural dyestuffs there is a great deal of regional variation, as the desired colors may be obtained from several substances. Numerous plants produce a yellow dye, and many greens result from first dyeing with indigo and then yellow. Probably the brightest yellow is from saffron, but this is seldom used now and was always costly. More common is the yellow from weld, a delicate vine of the Reseda family, which grows wild in many parts of the Middle East. Flowers, stems, and leaves are all used, and the amount added to the vat varies between five and forty percent of the weight of the wool, depending upon the shade desired. The leaves of Sumac and other vines are also used, but, the color is not so vivid as weld. Pomegranate rind, which is cheap and plentiful, produces an acceptable yellow or yellow-brown. Throughout the Middle East there are doubtless dozens of other botanical sources of dyes used in different villages. Those we have described, however, are certainly the most important.

A short guidance about what main natural colors are derived from is described below: