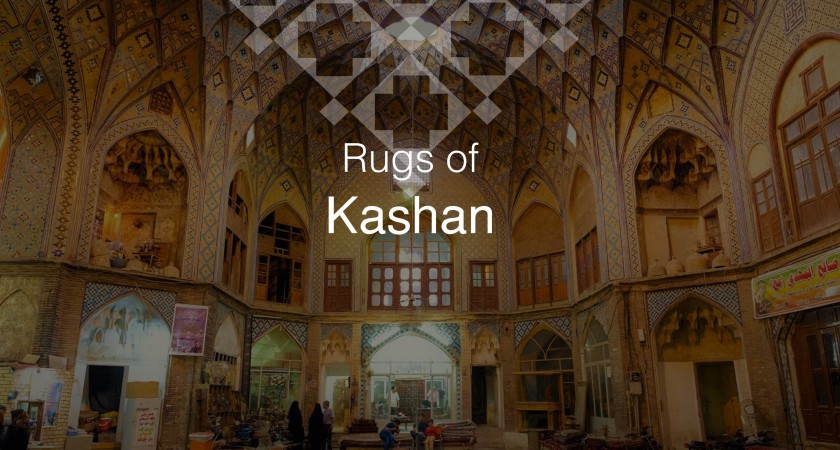 Kashan is a historical city of more than 300,000 inhabitants that currently is located in Isfahan province of Iran. Kashan has a shining global reputation for its stunning historical architecture, excellent rose water and great handmade rug.

Rugs of Kashan are typically recognizable as the most beautiful and famous of all Persian carpets. For many of carpet lovers, the image of a Persian rug in their mind is an original Kashan rug with central traditional medallion on a red field.

The city name comes from the Kasian word, the original inhabitants of the city, whose remains are found at Tapeh Sialk dating back 9,000 years; later this was changed to Kashian, hence the town name. Between the 12th and the 14th centuries Kashan was an important production center of high quality pottery and tiles. In modern Persian, the word for a tile (Kashi) comes from the name of the town.

Archeological discoveries in the Sialk Hillocks which lie 4 km west of Kashan reveal that this region was one of the primary centers of civilization in pre-historic ages. Thus, Kashan dates back to the Elamite period of Iran. The Sialk Ziggurat still stands today in the suburbs of Kashan after 7,000 years.

During Safavid era, however, its functions as a trade center were much like those held by Tehran today, for while it was not a crossroads, it was the largest city on the northwestern arc of interior trade route, and virtually all traffic between Isfahan and the East passed through it.

At this time Kashan developed a reputation as one of the finest weaving centers of Persian carpets, and likely the Vienna Hunting Carpet and other great works of the Safavid period were produced there. It was especially known for its work in silk, as much of the limited croplands around the town have been devoted to sericulture. This crop is well suited to these lands, for more than any other major Persian town, Kashan is an oasis, surrounded by gravel plains too arid for dry farming and standing near the river. The area receives its water from abundant and perennial springs in the Kuh-e Sefid, which issue five miles north of Kashan around the village of Fin. There the water is first directed through series of pools in a magnificent garden built by Shah Abbas and still maintained. These springs supported one of the earliest known settlements on the Iranian plateau, and excavations may be seen near the town. Despite the vicissitudes of the silk industry, such as economic depression and diseases of the silkworm, the water continues to support a flourishing sericulture on the sloping plain surrounding the town. The splendid heritage of weaving silk continues today in Kashan, and until the last two decades, when silk began to be used extensively in Isfahan, the city held a virtual monopoly in Persia on the production of this type of rug. Before the turn of the century, Tabriz offered some competition, with silk rugs that were woven in a wide variety of designs, from Turkish prayer rugs to Safavid motifs, but these have not been made since the 1920s. Tabriz rugs can usually be distinguished by the use of Turkish knots.